A tale of two chairs

A tale of two chairs

Both of these armchairs were manufactured by The Packet Furniture Co., Great Yarmouth, and formed part of the Tecta range developed by the company in the late 1940s.

The chair on the left is the Tecta demountable easy armchair, designed in 1946 by the world-renown architect Eric Lyons.

The chair on the right is from the ‘Cromerwood’ range of furniture designed by the virtually unknown G.A. Jenkins in 1948. The open backed ‘Linden’ armchair was also designed by Jenkins for this range.

The Packet Furniture Co., later in collaboration with E. Kahn & Co., developed the Tecta plywood furniture range as a solution to post-war production costs. For the designer, plywood allowed a greater freedom of form whilst still retaining the necessary low-cost manufacture. The stacking side chairs produced within the Tecta scheme have become ubiquitous in village halls and schools around the country. 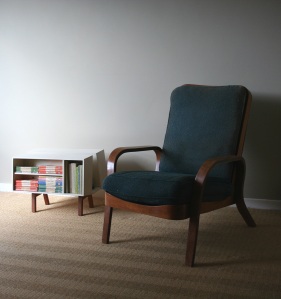 As an architect, Lyons set the standard for contemporary housing with his Span developments, and had perhaps seen the need for similar standards within industrial design – other projects included the ‘Midget’ speaker for Celestion Ltd, and a battery charger for the McMurro Instrument Co., for whom he also designed exhibition stands. With his furniture designs, he could see the potential of a knock-down structure as a means to allow ease of transportation, and in turn, to further minimise production costs. Although the birch laminate was veneered in walnut, and these chairs were often upholstered in Marianne Straub fabrics, his designs were an overall utilitarian form, the function somewhat outweighing the aesthetic.

Jenkins, however, took a slightly more refined approach. Whilst still an austere design, the beech laminate frame has a less clunky feel, the gentle scoop of the bent ply arm and leg section provides an ergonomic form lending the whole chair a light appearance.

Over the past few years, enthusiasm for post-war British industrial design has grown and, as more of the foot soldiers in furniture manufacture have been discovered, The Packet Furniture Co. has quietly gained interest. Eric Lyons is perhaps the best-known name to emerge from the list of designers who worked for the company, his Span housing developments and Presidency of the RIBA (1975–77) have allowed him a place at the forefront of British post-war design history. It is to this end that many of the pieces from The Packet Furniture Co.’s most prolific period are automatically labeled as a Lyons design and offered for sale with this provenance, consequently pushing interest – and in many cases the price – upwards. The work of G.A. Jenkins is therefore left aside, undiscovered as more and more ‘Lyons’ designs are brought to light.

As is often the case with so many other post-war manufacturers, through a lack of available records – as is the case with G.A. Jenkins – we assume the bigger name to be responsible for the majority of the designs produced, thereby eliminating any potential interest in the work of designers and craftsmen who deserve credit. The subsequent revival of these designers must wait until we endeavour to investigate their work further, rather than simply google the more commonplace name and then attribute all designs to that more immediate person. Many people were involved in the re-instatement of British manufacture in the post-war years. The likes of Ernest Race, Robin and Lucienne Day all hold their place, amongst the magnitude of talent involved in, for example, the ‘Britain Can Make It’ exhibition of 1946 and the subsequent ‘Festival of Britain’ in 1951. Unless we work to research through books and period features, these names will be forgotten to the age and their work remain undiscovered forever.